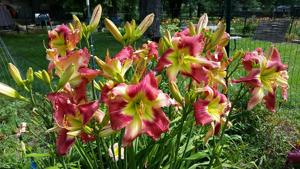 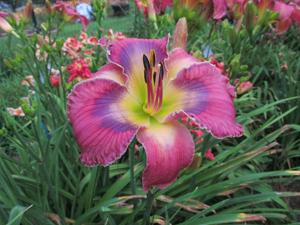 CITY OF REFUGE - (Seifert, 2018)
height 42 in.(106 cm), bloom 6 in.(15 cm), season M, Rebloom, Semi-Evergreen, Tetraploid, 30 buds, 4 branches, Lavender rose with lavender blue eye, cream patterned sepals, and bright green throat.. (Vertical Horizon × Desire of Nations)
This plant has been a delight and a favorite from the first blooms. It sets pods easily, but with our slow growing cycle here in the north, I haven't seen the kids yet. One of its siblings has also been selected as a possible future. 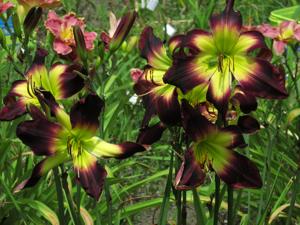 CRAZY CAT LADY - (Seifert, 2018)
height 42 in.(106 cm), bloom 8.5 in.(21 cm), season La, Dormant, Diploid, 18 buds, 3 branches, Unusual Form Spatulate, Dark velvet burgundy with wide chartreuse throat.. (Raven Woodsong × Laura Harwood)
Very LATE. So late that it lights up the empty garden, causing late visitors to say, "Ohh,what's that?" Because it's late, I have forgotten to use it, but it sets tons of bee pods, so I can say that it is fertile! 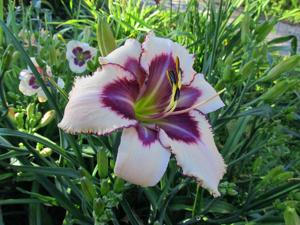 FUREVER IN OUR HEARTS

(Seifert, 2018)
height 40 in.(101 cm), bloom 6.5 in.(16 cm), season EM, Rebloom, Dormant, Tetraploid, 25 buds, 4 branches, Coral rose with pastel orange and yellow halo, tiny green throat and ornately ruffled edge.. (Wonder of It All × Red Friday) Full sib to Honor and Majesty with the same great plant habit. Consistent rebloom. I was unable to set the pods I wanted on it this year but thought it had set pods in the past. The pollen is good but I can't be sure about pod fertility.
This was named after our big old mutt, Nate, who I thought was the ugliest pup I'd seen! When we moved to this property, Doug wanted another dog and my son said his friend had a litter of pups to give away. Nate was the one my son brought to us, and less than 24 hours later, it was apparent he was sick. A vet visit revealed he had Parvo. We were dismayed, and as we left for a trip to the local Amish grocery, I prayed, "Lord, did you give us this dog just so we could watch him die?!" We were dumbfounded when we came home and he was waiting for us at the attached garage door where we were trying to keep him comfortable. He wanted to eat, and eat he did! He went from deathly ill to bouncing off the walls, just like that, and never showed any more signs of illness. He was rambunctious, and our old dog Taz, disapproved of him bugging her as he grew. She permanently shortened one ear! He grew to be a handsome, drooling, 100 lb mutt that we will never forget. We lost him this year and this flower is in remembrance of him, our furever friend, NATE. 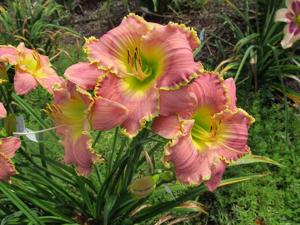 I HAVE A CONFECTION

(Seifert, 2018)
height 32 in.(81 cm), bloom 5.5 in.(13 cm), season M, Semi-Evergreen, Tetraploid, 24 buds, 4 branches, Pink with dark pink pencil banded, lavender watermarked eyezone and vivid green throat, double edge of dark pink and yellow slightly toothy edge.. (Truly Angelic × Priscilla's Smile)
This one sometimes shows a lot more pattern, and big teeth. The bigger teeth usually depend on heat, and lots of it. It is one of my go-to breeders, and I couldn't decide until the last minute if I was going to release any of it.
The kids I'm seeing from this are really promising! It had 9 siblings and none of them performed like this plant. There are toothy and some with amazing scapes. It does increase slowly which is why I almost did not release any. Don't be afraid to use this!

(Seifert, 2018)
height 36 in.(91 cm), bloom 7.5 in.(19 cm), season EM, Rebloom, Semi-Evergreen, Diploid, 25 buds, 4 branches, Rose red with magenta band surrounding wide green throat and cream white edges with streaked sepals.. (Dragon Seeker × Arno`s Bow Tie)
This one is a strong grower. It reblooms, and always puts on a show. Pod stubborn, but pollen is good. I hope to see some good results showing the streaked sepals and green throat in the kids. This was named for the "Draggin" Wagon" my brother made for us kids, and i thought it flew like the wind, being about 6 years old! I could never figure out why he named it after a dragon until I was older and saw the wordplay. 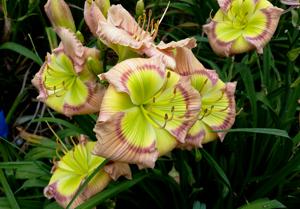 (Seifert, 2018)
height 35 in.(88 cm), bloom 5.5 in.(13 cm), season M, Dormant, Diploid, 25 buds, 3 branches, Sandtone pink with darker rusty rose band and very wide, pleated green throat.. (Ida Mae Norris × Arno`s Bow Tie)
What else could be expected from these two northern parents but a great kid? I like the height of this one, being taller than both parents. It's fertile, and definitely catches the eye when you walk by! One of my favorites this year. 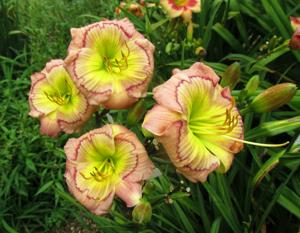 (Seifert, 2018)
height 32 in.(81 cm), bloom 4.5 in.(11 cm), season EM, Rebloom, Semi-Evergreen, Diploid, 15 buds, 3 branches, Rose pink with wide pleated green throat radiating out to chartreuse, surrounded by a lavender halo punctuated by maroon pencil band.. (Green Treat × Cosmic Kaleidoscope)
An eye-catcher from the start and very fertile, it is also a strong rebloomer. This year even with pods, it rebloomed 4 times.
I haven't seen it's offspring yet but am expecting some to have this trait as well.
Named for our new green-eyed brat, BLUE, who was a tiny 7.5 lb. lb puppy at 6 weeks and at 6 months here, a solid 65 lbs. 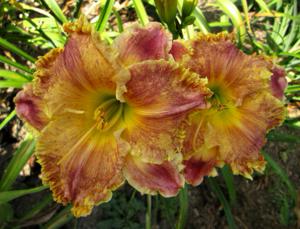 (Seifert, 2018)
height 28 in.(71 cm), bloom 6 in.(15 cm), season EM, Rebloom, Semi-Evergreen, Tetraploid, 16 buds, 3 branches, Stippled and splotched brick red with heavy gold edge and small green throat.. (Something Marvelous × Red Friday)
Starts out with muted color but as the season progresses, splotches and stippling become bolder in color, showing more contrast. It actually took me a couple of years to really see what was happening as the plant matured. It is a rebloomer and fertile, but can be selective about the pollen used. 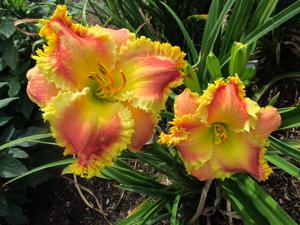 (Seifert, 2018)
height 31 in.(78 cm), bloom 5.5 in.(13 cm), season MLa, Dormant, Tetraploid, 28 buds, 4 branches, Light red with sunny yellow halo, small green throat, and heavy yellow teeth on the petal edge.. (Ruffled Strawberry Parfait × Something in My Teeth)
Sibling to Sweet Pibble Kisses, this one steals the show. Fertile both ways, always has heavy teeth. Named for my pretty girl who lets me put nail polish on her, but so far no lipstick! 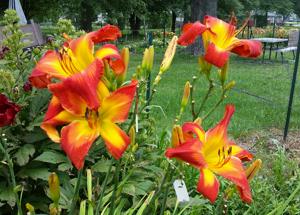 (Seifert, 2018)
height 45 in.(114 cm), bloom 9 in.(22 cm), season M, Semi-Evergreen, Tetraploid, 22 buds, 3 branches, Unusual Form Spatulate, Hot red orange with small green throat radiating out to yellow and lighter orange halo, yellow marked sepals, and yellow starburst midribs. (unknown × unknown)
This plant was rescued from the compost after being dug prematurely, so parentage was lost. It is a fast increaser, and is pod fertile although selective about the pollen put on it. I neglected to use the pollen, so not sure, but it looked viable. This is a wowser in bloom that will definitely get noticed! 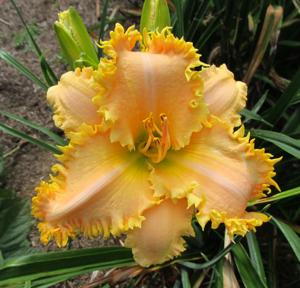 (Seifert, 2018)
height 32 in.(81 cm), bloom 5.5 in.(13 cm), season MLa, Dormant, Tetraploid, 26 buds, 4 branches, Glowing peachy pink with baby pink midribs and heavy snaggle tooth edge.. (Ruffled Strawberry Parfait × Something in My Teeth)
Fertile both ways, and while I haven't seen the kids yet, I expect some heavy snaggle teeth in the kids. Just like our sweet pittie pups, you get sweetness with lots of teeth. 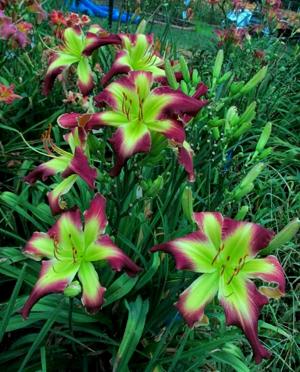 (Seifert, 2018)
height 39 in.(99 cm), bloom 8.5 in.(21 cm), season EM, Rebloom, Dormant, Diploid, 40 buds, 4 branches, Unusual Form Crispate-Spatulate, Burgundy maroon with wide starburst chartreuse throat on all segments and thin white edge on petals and sepals.. (Smoke Scream × Kermit`s Scream)
Starts early and keeps building. It went all summer loaded with pods, and was finally split and lined out. One of the lined out fans sent up a bloom scape! Most likely a bud builder, and extremely fertile both ways. Good grower!